In the last three days, there has been a lot of movement in space around the Earth and throughout the Solar System, when non-Confederate forces have been trying to “threaten” in some way, “throwing themselves/kamicazes” against the more physical ships of the Federation and cause disharmony. Useless, Ashtar Command Forces, Central Race, and one of the latest Light Armies that came to the Solar System, called “The Spherical Guardians.” (I am channeling on them, they have been gradually giving me information, as soon as I finish it, I will publish) are controlling and harmonizing the whole situation.


This movement began when a large Draco Mother Ship started approaching the first magnetic protection barrier near the Kuiper Belt and was trying to enter the Solar System and was prevented by the Ashtar Command and the magnetic belt. This non-confederated Draconian ship attempted to enter after a desperate call from Earth of those who served them, as well as from the Draconians who are within the protective barriers. Non-confederate Draconians, as well as Reptilians and other non-confederate races that are “trapped” within the magnetic barrier raised by the High Commands are trying to escape somehow, trying to cause some confusion.


For now, nobody leaves the Solar System. It is a protection barrier of the High Commands until all non-confederates are brought to Council. This barrier is divided into three layers: The First, it can be said that is beyond the Kuiper Belt, involving all of it and has a certain thickness. The Second involves more the Solar System, in a thicker layer from Jupiter, (that already involves Jupiter). And the Third and strongest and thickest surrounds the Earth, the Moon and the Sun completely. The drawing below can exemplify better: 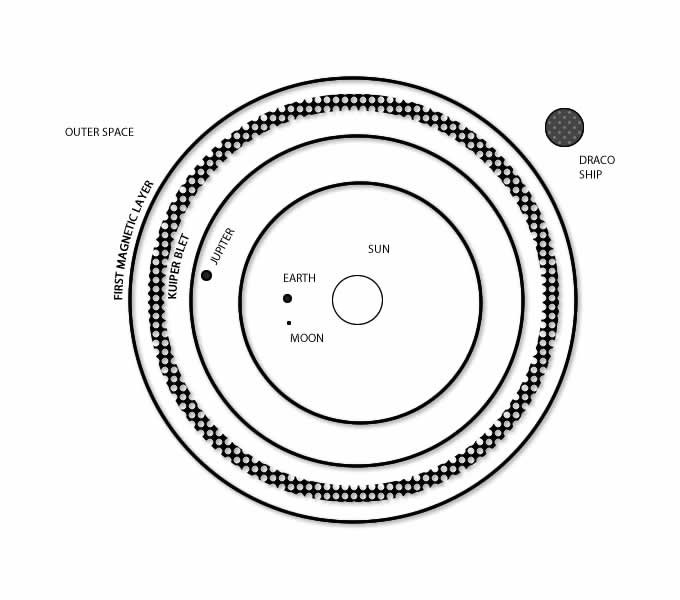 All this agitation has been causing movements within the Solar System and great energetic agitation, because the Confederates on Earth, you who are reading this note,are being called by the High Commands to take your vibrations to the heights and, at the same time, incorporating more of your galactic personalities into the surface. Part of this aggressive non-Confederate movement is due to the fact that many on Earth are beginning to realize, directly or indirectly receiving information of who they are on agalactic level, and by receiving this information they are anchoring a lot of Light and causing disruptions in the Matrix. When an incarnate confederate does not know who he is, where he came from or where he is going, but suddenly starts being istructed by intuition, dream, meditation, or receiving information from another already conscious confederate, this causes very powerful Light discharges into the Matrix, causing severe disruptions and it has been leaving the negative forces desperate, because the Matrix is being rapidly broken and the non-confederated are running out of energy sources.


In short, incorporating your galactic identity into physicality is a major problem for negative forces and they have been sending signals beyond the first barrier, trying to get help somehow. Although these signals are not being directly interrupted by the High Commands, since everything has a motive, it is useless to try and to believe that the help will arrive and to overcome the barriers. This will not happen. Negative forces within these barriers need to make do with themselves. No external reinforcements will come to rescue them or support them in any way. Thus, the Ashtar Command Forces is also sending Confederate Draconian and Reptilian Fleets, who operate within the Command, to try to “negotiate” with the non-confederated. Although they belong directly to the same race, the Dracos and Reptilians have not been receiving with open arms their brothers of the same race. Anyway, everything is under control.


Meanwhile, as long as the galactic identities are being recognized and reverberated on the surface, ensuring that the High Commands continue to harmonize in space, until the Central Flash Special Moment. While all this movement occurs, many may have dreams in space and flashes even during the day of what is happening up there. With all due respect for the negative forces, nothing will stop the awakening of Earth’s humanity to its origins and potentials.


For now, that’s what Ashtar Command asks me to communicate.


In Love and Blessings,