Gabriel: Queridos leitores em português, essa é a tradução para o Inglês da mensagem original, postada anteriormente em português: Aqui
Dear, the SaLuSa asked me to let that song below to be heard at the time of reading. I recommend you read the message aloud as the background music plays. 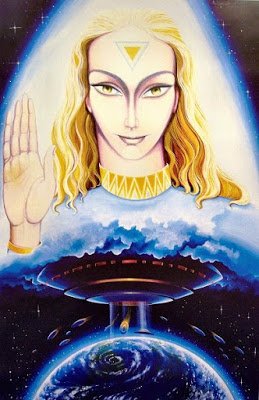 There are a growing number of people who are beginning to have contacts with various beings of the Galactic Federation. These people began to be contacted through dreams, telepathically, and now many of them are being intuited to go places in nature, where many beings of Light desire personal contact. They can easily be contacted if, with love intentions, they go to the areas far from the public movement, where the ships can show themselves and, if necessary, land. The old control grid of those who belong to the dark-ness can no longer threaten our landings. Although infrequently, we are starting some contacts on the surface. At first, the Pleiadian forces are leading the way, contacting and taking people aboard their ships for a visitation.


It is well known to you, too, that the Inner-Earth family wishes to contact you and those who are closest to the entrances of the sacred caves scattered around the world may be surprised by a hand on their shoulder when they are in these environments. They are very loving beings and wish once again to return to the surface, so as to assist you in all that is necessary to rise again from the low vibrations. They also wish to help in the healing of your bodies and minds and in harmonizing the fauna and flora of Mother Earth.


All this communion between the Forces of Light – physical and non-physical – has enabled the overthrow of many frontiers on Mother Earth, ensuring that people interact with each other personally, and increasingly have the freedom to come and go. The forces of darkness are stamped out, as has been told, and many of the top refuse to surrender to the Light. There is nothing to fear in this case, dear ones, since you are ensuring that they do not return to the old leadership over you . They know that the game is turning and an example of this was the election in the United States of America, when the candidate chosen by them did not take power. Although the elect does not directly represent the Forces of Light, it is known that it is not directly in the hands of the cabal. This can easily be turned away when one, with greater capacity and consciousness, receives the endorsement of the Light to assume power in America and begin the changes and the overthrow of the forces of darkness in that region.


The elected candidate is already being contacted by the Light Forces and receiving all the information so that through his free will he can serve the Light. We can not say that he will, because he has his own agenda and we honor and we respect each other’s choices. But we have to say that no one who does not truly represent the Forces of Light and does not work for the people will not stay for long. The new energy is pushing out of the world scene anyone who still remains with the old agenda of greed, inhumanity, and is in the hands of the cabal.


It is well known that many negative groups on the surface of Mother Earth have their own particular agendas. Each one is fighting for their interests and that is why they began to lose the battle for planet Earth. The Light is in Oneness, both physical and non-physical, works for the common good in perfect harmony, and is showing all weak nodes to the infiltrators of Light in the secret agencies of the world. They, as extremely intelligent people, are unleashing the faulty knots and opening up for more Light into the sectors still dominated by the cabal. Recently, one of these flawed nodes has been unleashed and you will see the result in your financial system very soon.


There’s a lot more behind the scenes than you can imagine. Keep in mind that no action of those who belong to the darkness goes unnoticed, as we have mentioned so many times. Always be vibrant knowing that the Forces of Light have not receded and remain in constant advance, both on the surface and in the astral zones around the Earth. You know that you are also protected by Galactic forces around the Earth, but you know that the forces of darkness that still hold the media control will try to frighten you with an an-nouncement of the approach of a particular asteroid. We are quick to say that it will be a false statement. And even if it were true, believe that we can divert the route at the push of a button. Their threats are small when you, the people, hold all power able to quickly restore the face of the Earth, giving back to it its original beauty, and not being more likely to fall into its false flag threats.


The buzz among those who belong to the darkness is constant and you can easily distin-guish the frequent phrase among them about you: “They are awakening!” This is a clear sign that they know that you, as one people, have the ability to drive them away in the blink of an eye. It is enough for you to recognize your transforming power, and in invoking heavenly forces you will receive all the help you seek. There is nothing to fear if what has been decreed is that you attain the high vibrations through a quantum leap never before seen in this universe. That is why you are having all the attention, as never before. You know, you are the ones to whom you must be applauded. And we’re here for this.


I am SaLuSa from Sirius, and I would also like to say that all the channels of the Forces of Light on the surface are carefully monitored by the Guardians of Light so that they will not suffer serious interference. Hatonn is ensuring that the information arrives cleanly and clearly to those committed and determined channels, unless some of these retreat from the original idea through free will. Otherwise, they will be constantly receiving all the help to carry on with their work. They may have the eyes of dark forces upon them, since their work awakens many souls to Light, but they will not be overthrown, for resilience is innate to them. And we, your Galactic family, are here to ensure that you constantly have more support than you can imagine.


Be in the Light.