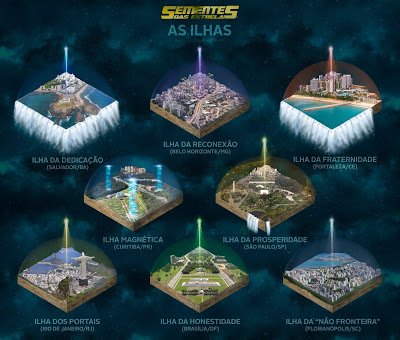 The Pleiadians report that a wave of Light Blue Light swept the Magnetic Island so powerfully that it quickly closed some of the Island’s gaps still exposed and prone to negative entrances. Of course, these “cracks” will never be opened again, and it remains for those magnetic bearers and the like to remain inviolable to prevent further openings.


Of course, this does not mean that opposing forces of Love will not manifest and try to disrupt the plans already drafted by the Light Forces, but surely a greater empowerment will be evident and, more and more, security will be seen in the works developed by the Allies of the Light Forces, in this region.


Three Braid-shaped Pillars of Light were seen being installed on the Island at three specific points not mentioned here. These pillars are as if they were “soldiers” in the celestial vault and planted in the floor of the Island. These braids of Light are of a brilliant neon-colored color with an energy that rises and descends from the top to the ground, quickly. They stay in a colorful hue for about a minute, and for two minutes they turn into a wonderful shade of blue. These braids are bringing more energies from the Magnetic Universe, called the “Quadril 5”.


They add that not only energies of the “Quadril 5”, but of other Magnetic universes, such as Vitrol-X and EX-Prix. All this Magnetic concentration on the Island is causing extreme subtlety, giving the clear impression that “things” are not so solid. Those more sensitive can clearly perceive the subtlety of the environment as they enter the Island, since magnetism tends to make things more and more subtle. In extreme magnetism, things become dematerialized, manifesting only as pure energy, not “getting” to become denser due to this magnetism.


They also report that there was a “rain” of Lapel Crystals all over the Island, spreading them all over the place! Several entities incarcerated in their own hatred were quickly raised to the higher spheres, and around 4:00 am on 11.06.2017 a large mother ship hovered over the Island, helping to harmonize the powerful currents present. Not that they were negative forces, but simply so that when most of the Islanders woke up in the morning, they would not take an extreme “magnetic shock.” (They smile …)


It is also said that this great activation of the last moment triggered activations of force-sustaining islands throughout the country. At first they inform me of seven (7) powerfully activated new islands:


Brasília (DF) = Island of Honesty. (They say that because of the movements that take place in this city, some people can turn a blind eye to that information and find an irony. And they say lovingly that this place is being prepared to be the sustaining base of the energy of Honesty. Therefore, those inhabitants of this Island must immediately begin to support this energy, for it will radiate to every country and planet.)

São Paulo (São Paulo) = Island of Prosperity. (Those in this region are being called to sustain this force in order to radiate throughout the country and planet! Those with financial difficulties do not necessarily mean that they need to move there unless their hearts say so, but that surely, this region will begin to radiate this energy of prosperity, beginning to annul any programming of scarcity and powerlessness.Inhabitants of the Island, the projector was pointed!)


Minas Gerais (Belo Horizonte) = The Island of Reconnection. (The inhabitants of this Island are receiving a specific projector: to sustain the energy of the Galactic Reconnection. They will sustain and radiate the force of Unity and remembrance of the home to the other Islands and Planet, preparing the minds of humans for contact with the Galactic Forces and The inhabitants of this Island will of course have more contacts with the Galactic people and will radiate these experiences to the others.This does not mean that the other Islands can not have contact, but only that a specific projector is being pointed to that Island for support by the inhabitants.)

Ceará (Fortaleza) = Island of Fraternity. (The inhabitants of this Island will radiate the energy of fraternity to the other Islands, inspiring all the feelings of union and cooperation. A powerful projector of Gold Ruby color is being pointed there and calling all the inhabitants of it to connect and radiate all this wonderful energy!)

Bahia (Salvador) = Island of Dedication. (The inhabitants of this Island will be radiating the energy of dedication and commitment, inspiring the other Islands and the Planet, so that the dedication and loving commitment to something expand and assist in the growth of all and of themselves. time something they wish to do, in order to get ahead with their necessary moves and moves! A Dark Blue (sapphire) projector is being pointed at this Island.)


Santa Catarina (Florianópolis) = Island of the “No-Frontier”. (On this Island, all its inhabitants are receiving a powerful projector that will radiate to other Islands and to the Planet, a projector that will inspire people to Unity and to the idea that there is no need of frontier between peoples. The inhabitants of this island can, if tuned to the task, perform meditations where they should visualize all the borders of the planet being dismantled and all the people united, without prejudices and fears. To see the Love and the Compassion reigning between the towns and the complete disarmament of weapons of mass destruction , built on top of a false slogan of “national security.” Islanders, connect and break the borders!)

Rio de Janeiro (Rio de Janeiro) = Island of the Portals. (On this island there are several portals scattered everywhere, and the inhabitants of it are being called to radiate and activate, mainly, the portals of Compassion and Benevolence. Gávea Stone is one of the most powerful points of the place.Inhabitants of the Island, radiate the energy of Compassion and Benevolence, as well as inspire the other Islands to reopen closed portals long ago.Each island naturally has its own specific portals, and every inhabitant of it will also feel what has to be activated. mixed with bright white is being pointed and is waiting to be sustained by all the inhabitants of the Island.that at least those who read our Bulletin may be attuned to these truths and radiate to those who are not, so that they can reactivate the portals within themselves and become one more in the task.)


The eighth Island is Curitiba (Paraná) – already known as Magnetic Island – and is responsible for anchoring and sustaining the Magnetism, the Force that helps in the dissipation of the Extreme Materialist idea and reconnects the BEING to the SPIRIT, inspiring it to the LOVE without LIMITATIONS , and giving it, again, the truth that ALL IN CREATION IS ENERGY, AND IS ETERNAL. Magnetic beings are several incarnating on this Island and / or coming from other Islands and are being inspired according to their soul plans. This Island has something interesting: because of Magnetism, it helps, quickly, in the Sublimed Creation moments, nonmaterial Moments. It helps souls to have the most sublimated experiences their transforming carbon bodies can sustain. The inhabitants of this Island are called to always maintain the Amorosity and to transform any extreme materialistic energy in smoothness and balance. The balance between matter and the SPIRIT is necessary so that they can have more elevating experiences. And the Magnetism of the Island, as it is very intense, helps, since it is a subtle Island and, practically, does not let the energy of matter “dominate”, always giving an air of Living Spirituality, which naturally balances with matter. The human mind is programmed for materiality, but those who enter the Island are strongly attracted to something beyond matter, however materialistic they may be. Present Magnetism is powerfully attractive. Attractor for the SPIRIT.


Because of these deliveries of information, beings who act in the low vibrations and feel guardians of these regions, are extremely irritated with Gabriel RL because he is bringing that information. It is asked, then, that amorous projections be sent to him, forming around him a blue sapphire quantum field of protection, preventing the irradiation of these brothers to arrive and radiate it. Despite the presence of the Zil Master Code (See Glossary: ​​https://www.sementesdasestrelas.com.br.br/p/letra-c.html), the irradiations can still arrive and an “Extra Hand” is requested. The Pleiadians also report that they are many blocks of information.

I, Gabriel, will bring more Islands, as the next Reports come out. Whenever I get a lot of information like this, I get a bit tired because I have to decode all the blocks of information they send. I act, in this case, as a quantum translator. I will bring information about all the Islands of the Country (Brazil), and what else they wish to inform.