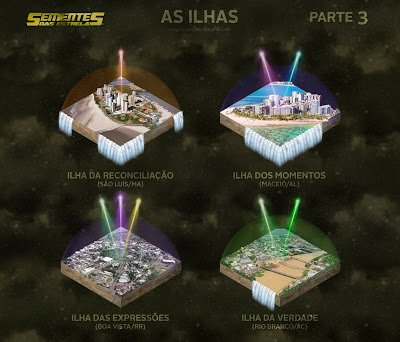 
The Pleiadians report that there is a great movement of the type “Galactic Blitz”, as a security measure to guarantee certain movements that will occur in the coming weeks and months. A great effort on the part of the Light Forces allies on the surface gave the signal for the Galactic Forces to also take the necessary measures to ensure the safety of terrestrial humanity as well as prevent some beings from escaping from the physical planes and other planes that surround the land. Some of them have tried to hide in the plasma, etheric and astral planes. The Pleiadians say they are failed attempts, for they are all well mapped.

They also report that some negative plasma amebas are attempting to enter the plumber’s fields (Gabriel RL) in order to prevent him from divulging information about the Islands and their Expressions. Each Island mentioned has those negativated beings who believe they are the owners of the space and are getting enraged with the information given by us (Pleiadians) to Gabriel. Of course, there is a field of protection and the intentions and meditations of Light sent have guaranteed that it will remain inviolable and proceed with the deliveries. All these are final maneuvers to try to stop and prevent the necessary advances.

The Pleiadians also say that, “The Ashtar (s)” approached, drastically, the seven planes that make up the sphere Earth, hence the name “Galactic Blitz”. It is they who have approached, considerably, to ensure the final “policing” and to take drastic measures to prevent some of the movements that the agents of the dark forces planned to do as retaliation. All this, not only for the delivered Islands, but for all the movements that have occurred behind the scenes of the whole Planet, these movements to promote the advancement of the process of Integral Divulgation of the existence of the Galactic community, as well as the liberation of Technologies, especially those which will guarantee the perfect health of the physical bodies.


The Pleiadians ask the Earth Family to meditate in support of Mother Gaia in their necessary moves. They say she will need to make some moves and the intention to support her in this will ensure smooth movement. Gaia is very happy and so is the opportunity for her entire planetary body to be given the chance to rise to high vibrations in a completely conscious way, and even more so by being supported in every move she needs to make. She is like a mother who is happy to receive the affection of her children.


A little more about Gaia: they report that intense movements of the planet’s Kundalini – currently located in South America – have begun and people from these regions will be shaken in their interiors. They will feel a lot of internal heat and feelings of speaking everything they think. For a long time, they say that Earth’s human beings hold much of their feelings, and this will begin to be expressed more and more, out of necessity. A deep connection of the Kundalini with the Throat Chakra at this time will strongly promote this. They also say that not only that, but there will be great transformations in the emotional field, so that long-held luggage will also need to be urgently released. They report that for people from other regions, movements with other “symptoms” will also occur, and that transformation and movement is not only happening in South America, but across the globe.


And they ask to release some more Islands, so that more and more people take their positions of Anchors of Light and initiate the supports that have drastically raised the vibration of the Country (Brazil). They follow the Islands that they have mentioned:

Maranhão (São Luís) = Island of Reconciliation. (This Island is receiving a Golden Ruby-colored projector.The inhabitants of this Island will receive powerful discharges of Light and initiate a lift to awaken in themselves the need to reconcile themselves with their internal affairs and immediately reverberate the need for it for others.


They are being called upon to sustain this force of Reconciliation, Forgiveness, Unity, and reverberate for the other Islands. One can not advance without certain subjects having a harmonious and happy ending. This radiation will be so intense that hardly anyone who has disagreements with others will be able to find them without making peace and / or at least initiate a movement for energy rebalancing, allowing the advance to new experiences without any problems and emotional debris . Dear supporters of this Projector, your mission is very important and this energy urgently needs to be radiated to the other Islands of the Country, and of course, to the whole Planet. It’s Union Time! It’s time for Reconciliation! It’s time for Pardon! You do not necessarily need to be with someone who does not energetically thrive, but the release of debris or ties that bind you to some situation or person must happen. They need to be freed so the breakthrough can happen. Be this breakthrough! Inspire the advance!

Alagoas (Maceió) = Island of Moments. (This Island is receiving two projectors, Light Pink and Light Blue.) The inhabitants of this Island are being called to anchor and radiate the best moments of life.The radiation of this Island will spread rapidly, so that people begin to keep The old memories of pain and despair need to be lovingly left behind .. Nurturing only good moments will create powerful currents of Light that will nullify karmic remains.It is time to create There are two Avatars of the PVSE who are specifically being called to radiate their energies in this region so that they can also support these projectors. Dear inhabitants of this Island, you, in and of itself, are a SUBLIME MOMENT. Give yourself the opportunity to recreate your lives, transforming them into pure joy and sublimation. Radiate this force to the other islands by inspiring them to cling “only the good times, those who keep their vibrations and accelerate all processes needed to allow them an increasingly full state of happiness and peace. Attachment to times of pain and suffering drains your vital energy, forcing you to always begin again. It’s no time to start over. It’s time to complete the task with a good smile anchored in the present moment of unified creation to Source. It’s no longer time to go back holding the burden of pain. It’s time to move forward, remembering that you are the ones who create and, as Creators, create only Joy, create only Happy Moments.

Roraima (Boa Vista) = Island of Expressions. (The inhabitants of this Island are receiving three projections: Violet, Golden Yellow, and Light Green. Dear supporters of this Island, you are being called to radiate the energy of the Free Expression.You are the ones who sustain the force that will dispel the prejudices, fears, blockades, insecurities, and everything else that prevents human beings from expressing themselves as they really are. From you starts the radiation of Oneness, the primary idea that we are all ONE, even with our differences. Country and Planet, so that the other Islands are also anchored in these Projectors. Nothing else matters when we are free to be who we are. You are a Divine Being, just as it is.You are an important Link that keeps all Creation connected, just like You, the beloved inhabitants of that Island, will anchor it, and radiate in all directions.You have the very dearest support of a Master named Rowena, who and is available to assist in what is necessary. Of course, all the Masters are on duty, – and so do they, – but especially Rowena, who likes this place, for a reason she does not tell me, and has a particular connection to that region. Be! You are the unique, perfect and incorruptible expression of Creation.


Acre (Rio Branco) = Island of Truth. (The inhabitants of this Island are receiving the projection of two projectors: Light Green and Dark Green and are under direct irradiation of Archangel Raphael, Master Hilarion and all beings of the Green Ray and Golden Green. they are asked to radiate it to the whole Country and Planet, in order to bring this deep connection with the Inner Truth and to express it. Those who have deviated from the path and repented today will always have a new opportunity to reconnect with the Inner Truth.Those under the strong projection of this Island will find it difficult to express themselves when they are not in alignment with their Inner Truth.In other words: untruth (that which is not according to the Innermost) will become difficult The inhabitants of this Island are being called to be in this higher alignment, so that whatever they express is only for the highest good and inspiration. the other beings. Nothing is said or expressed that might harm others. On this Island, the Truth will reverberate to all the other Islands. Those who have difficulty and often act with untruths to their own personal delights will be heavily drawn into an examination of consciousness, so that they will have no choice but to revise their concepts and begin their trajectories back to a state of Oneness, where what they perform, speak and / or simply gesticulate will only be for the betterment of being, – the self or the neighbor.

Temporarily, the Pleiadians say they will close this message because of the need for physical rest of the plumber, but that soon they will return with the remaining Islands of this movement. They request that these messages be scattered as much as possible to reach as many people as possible and that they are aware of the importance of their presence on Earth in order to assist in the anchoring of the Projectors, thus helping Gaia in her transformations and making possible even closer the Family of Space, which with each breath of the Earth Allies, approach their fleets, anxious for the Contact Eye in the Eye.